View the news conference that was held at Upper Merion Township Building announcing the start of the Aggressive Driving enforcement wave. Franconia Township Police Department is participating in this enforcement effort for the first time.

Drug Disposal Drop Box (Free) - Anonymous disposal of your unwanted, expired drugs. Located in the lobby of the Police Department.

Special Needs In-House Registry (Free) - Register your loved ones so that we have important information before we may need it in an emergency. Complete the form, and send it in with a current photo. This is in addition to Montgomery County's Special Needs Registry. 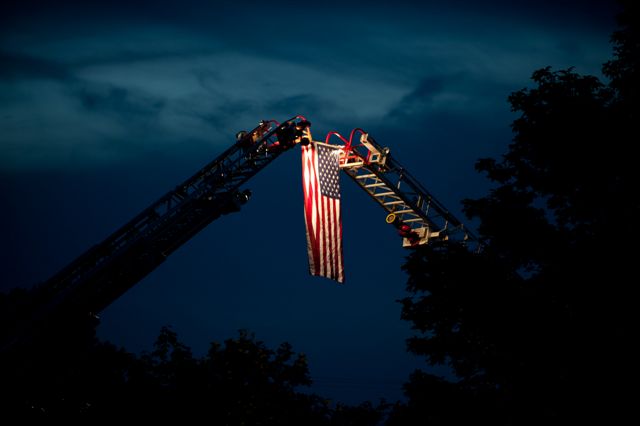 The Mission of the Franconia Township Police Department is to enhance the quality of life in our Township by working in partnership with the community and, in accordance with constitutional rights, to enforce the laws, preserve the peace, reduce fear, and provide for a safe environment.

As partners in the community, we are committed to law enforcement professionalism through:

INTEGRITY:
We will strive to uphold the public’s trust by being honest, competent and consistent in our beliefs and actions. We will hold ourselves accountable to the highest standards of moral and ethical conduct.

RESPECT:
We will treat all people with respect and dignity as we take pride in our profession, our community and ourselves. Working as a team, we will strive to be role models for our community by respecting the significance of human life and honoring individual human rights.

SERVICE:
We will dedicate ourselves to improve the quality of life in our community by providing a safe environment for all. We are committed to protecting life and property, reducing fear and developing a partnership with citizens to prevent and solve crimes. Chief Martin came to Franconia Township after serving with the Upper Merion Township Police Department in King of Prussia, PA for 31 years.  He graduated from Upper Merion High School before attending Memphis State University in Memphis, TN on a football scholarship.  Martin started his law enforcement career with Upper Merion Township after graduating from the Pennsylvania State Police Academy, Southeast Training Center in 1987.  Martin began as a patrol officer and also completed a two-year assignment as a detective.  In 1997 he became the department’s first full time Community Relations Officer, building the unit, implementing the D.A.R.E. (Drug Abuse Resistance Education) program and creating several long-standing initiatives.  A member of the Central Montgomery County Special Weapons and Tactics Team for 13 years, Martin was an entry operator and instructor for Immediate Action Rapid Deployment, Urban Police Rifle and MP-5 Submachine gun.  He was promoted to Sergeant in 2001, remaining in Community Relations and supervising the department’s Drug Task Force. Martin was promoted to Lieutenant in 2007, serving as the Commander of the Auxiliary Services, Patrol and Investigations Divisions.  The recipient of numerous awards and commendations throughout his career, Martin retired in 2018 to accept the Chief of Police position in Franconia Township.

Michael L. Martin was sworn in as the Township's new Police Chief on May 10, 2018.  Chief Martin is extremely honored to be the fourth Chief of Police in Franconia Township history.

The Department consists of 11 sworn police officers, one part-time police officer, one civilian administrative assistant, and one school-crossing guard. All are highly competent, committed and dedicated men and women with a common goal of meeting the needs and providing service to the people who work, visit and live here.

Please browse through our section of the site and feel free to send any suggestions or comments to me. I encourage you to contact us if we can be of any assistance to you. 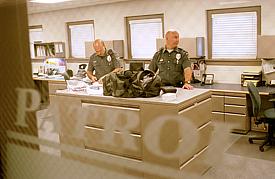 The Internet information resource, NetSmartz, has made training originally only available to law enforcement professionals available to the public. Their safety presentations are suitable for children and adults of all ages, covering topics such as:

NetSmartz is an internet information resource from the National Center for Missing and Exploited Children geared toward educating children about internet safety. Learn more on www.NetSmartz.org. 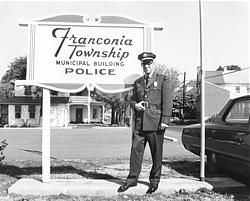 THREE DECADES, ONE CHIEF  Police coverage was provided by the Pennsylvania State Police until 1962, when a group of residents signed a petition requesting the Board of Supervisors create the Franconia Township Police Department. The Board approved the request and Kenneth Lear, a retired Chief of Police from Lansdale, was hired to build the Department. He and one part-time officer handled calls from the former township building, an old farmhouse that stood on the site that was more recently a bank and is now a used-car lot at Harleysville Pike and Allentown Road. In 1965, Paul R. Hunsberger was appointed to the Chief’s position after the death of Chief Lear. Chief Hunsberger served with the Upper Gwynedd Township Police Department for six years prior to his arrival in Franconia. The Chief’s family was dedicated to police service. During a time in Chief Hunsberger’s career, his father was the Chief of Police in Souderton Borough, and his half-brother, John Kayser, served as Chief of Police in Upper Dublin Township.

During the next 31 years, Chief Hunsberger oversaw the growth of the Police Department to meet the needs of a growing township. He was instrumental in developing many partnerships with the community, especially the schools, where he presented annual bicycle rodeos and coloring contests. In 1976, he supervised the Police Department’s move to the current Township Building on Allentown Road. Chief Hunsberger faithfully served the Franconia residents until his retirement in 1997.

CONTINUING THE LEGACY OF LEADERSHIP "Chief Joe" or "Koz" as he was known to many, took the reins from Chief Hunsberger after his retirement. Chief Kozeniewski started work as a Police and Fire Dispatcher for Montgomery County from 1971 through 1974. He then began his law enforcement career in 1974, joining the Upper Providence Township Police Department until 1981 when he came to Franconia. During his tenure here, he was awarded the "Outstanding Young Law Enforcement Officer Award" and served as both Vice President and President of the Montgomery County Lodge 14, Fraternal Order of Police. In January of 1997 he was appointed Chief of the Franconia Township Police Department. Chief Kozeniewski graduated from the prestigious FBI National Academy and the Pennsylvania Chiefs of Police Association Executive Development School. In addition to his participation and leadership in many programs, Chief Kozeniewski played an instrumental role in securing a new police building in 2004. He continued to work for the betterment of the Department and community for many years. Under his supervision, the Franconia Township Police Department became one of approximately 100 Accredited Police Agencies in Pennsylvania.  On May 14, 2018, Chief Joseph Kozeniewski retired from our Police Department after serving this community and our County since 1971.

Our present Chief of Police, Michael L. Martin was sworn in on May 10, 2018. Chief Martin was with the Upper Merion Township Police Department for 31 years before joining Franconia Township.

The Department now provides a complement of 11 full-time officers, one part-time officer, a civilian administrative assistant, and a school crossing guard. All of the Department’s vehicles are radio dispatched by the Montgomery County Communications Center, which provides the 9-1-1 emergency service. Each police vehicle is equipped with computer data terminals and automatic external defibrillators.

In May, 2004, the Police Department moved into its new separate 9,000 square-foot facility, which is adjacent to the Township Building. The new headquarters is designed to meet the needs for expected growth of the Franconia community for many years.